Rich from several billions of years of evolution, Life has extensively explored what is chemically feasible on Earth. This exploration drove the emergence of living cells, which exploit two non-canonical chemical actors: (i) Futile cycles. These modules ─ recurring in Biology ─ are cycles which convert a reactant back into itself after a series of energy-consuming reactions and/or transport processes. The adjective “futile” underlines how striking these cycles are to chemists, who are used to convert quantitatively reactants into products without further energy expense; (ii) Out-of-equilibrium steady-states. Living cells are alive, which requires sustaining chemical reactions out-of-equilibrium. Except in Chemical Engineering and in chemical dynamics, out-of-equilibrium steady-states are singular in Chemistry, where equilibrium or kinetically inert states are generally favored.

Our work recurrently targets and implements two designs of futile cycles that are sustained out-of-equilibrium at steady-state (Fig. 1). In the simplest design, a futile cycle results from shifting a reversible chemical reaction away from equilibrium by coupling with an energy source. We have adopted light as an easily tunable energy source with excellent spatiotemporal resolution to generate light-driven futile cycles (Fig. 1a,b). In the second design, a light gradient drives the emergence of two reaction-diffusion futile cycles from spatial connection between reactive solutions (Fig. 1c). 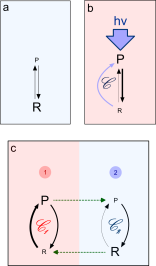 Figure 1. Out-of-equilibrium futile cycles. A solution contains chemical reactions modelled as a two-state exchange converting a reactant R into a less stable product P. Relative concentrations scale with font sizes. Arrows represent chemical reactions (solid line) and mass transport (dotted line), whose relative fluxes scale with the line thickness. a: Equilibrium. The overall flux in each mechanistic pathway is null and R is in excess of P; b: Light-driven futile cycles. When R is photoswitchable, light absorption further converts R into P, which relaxes back to R. At steady-state, the overall flux in each mechanistic pathway departs from zero and the light-driven futile cycle C emerges; P concentration is increased and the system is in an out-of-chemical equilibrium steady-state; c: Reaction-diffusion futile cycles. Concentration gradients are generated at the interface between the connected solutions 1 and 2 which are submitted to different sets of control parameters (e.g. light intensity). This results in two coupled spatially extended futile cycles C1 and C2 involving reactions and mass transport, which act as matter and energy pumps continuously transporting molecules and energy across the fluid. At the interface between zones 1 and 2, diffusion frustrates chemical relaxation and both R → P and P → R reactions are sustained out-of-chemical equilibrium.

These futile cycles have been recently used to design and implement an abiotic chain of energy transfer comparable fairly to the energy conversion performed in photosynthesis where light can sustain out-of-equilibrium a reaction (ATP synthesis) without light-absorbing reactants and products. Using light patterning and a diffusing hub reactant (the proton), we achieved to depart the ionization of carbon dioxide from chemical equilibrium. As observed in living cells, the spontaneous onset of this energy-transfer chain notably governed local generation of singular dissipative chemical structures: continuous matter fluxes were dynamically maintained at interfaces between spatially and chemically segregated zones but in the absence of any membrane or predetermined material structure.